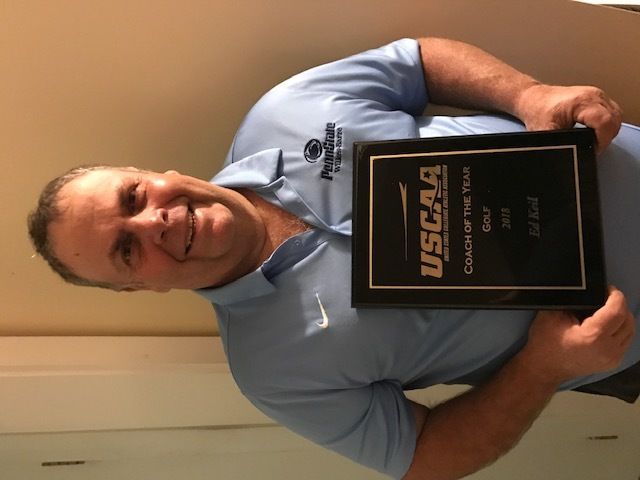 Keil grew up in Exeter and during summers, he worked as a member of the grounds crew at Fox Hill Country Club. Keil attended West Side Career and Technology Center in Kingston, where he lettered in golf for three years, captained the team, and was named MVP.

"I played my first round of golf at age 12 at Happy Valley Golf Course, now Four Seasons Golf Club, and was immediately hooked," Keil said.

After graduation, Keil enlisted in the United States Air Force, specializing in inertial and radar navigation. He served at the Eglin Air Force Base in Florida. Keil said most of his free time during his military service was spent honoring his golf game.

After his tour of duty was finished, Keil enrolled part time at Penn State Wilkes-Barre as a biomedical equipment technology major. At the time, he worked full time as a golf course superintendent.

"While a student, I befriended Athletic Director Jack Monick," Keil said. "Upon graduation in 1988, Jack offered me a co-head golf coach position with Dennis Puhalla. In 1989, I became head golf coach. And I've been here ever since."

Keil now resides in Hanover Township with his wife, Gina.

Since joining the Penn State Wilkes-Barre coaching staff, Keil has led the golf team to many victories. During his 33 years of coaching, his teams have won seven conference titles and have placed in the top five at the United States Collegiate Athletic Association (USCAA) National Championship Tournament three times.

"My biggest accomplishment as a coach is taking young people, teaching them about life, and watching them go out into the world and become a success," Keil said.

"Over the last 33 years, I have seen many changes, but dedicated players remain the same. You can't teach the love for the game. I've had the opportunity to develop many friendships with former players that endure to this day," he said.

According to Scott Miner, Penn State Wilkes-Barre athletics director, Keil has been a major asset to the campus' athletic programs.

"Ed Keil is one of the most successful head coaches in Penn State Wilkes-Barre's history and is our longest tenured head coach," Miner said. "Coach Keil has also conducted youth golf summer camps and ladies' golf clinics for many years. An accomplished golfer himself, he is a golf course superintendent with over 25 years as a Class A member of the Golf Course Superintendents Association of America."

Learn more about Coach Keil from his Athletics Hall of Fame biography.